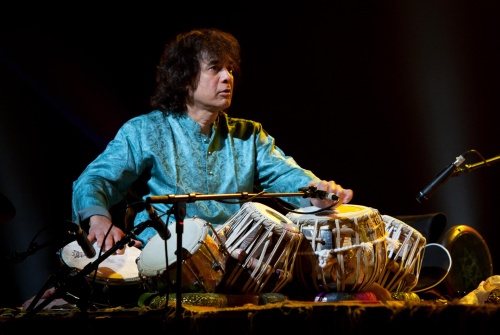 Zakir Hussain is Tabla player in Hindustani classical music. He is producer, film actor a music composer. He is a son of the tabla maestro Ustad Alla Rakha.  The genetic effect can be seen very clearly in Zakir Hussain. He has given musical performances across the globe.

He was born to a talented family so he gained popularity at primary level. As his father was tabla player so his inclination towards was his innate ability.  Along with his stage performance he has true devotion towards his education too and went to St. Michael's High School in Mahim and eventually graduated from St. Xavier's in Mumbai. He also did his and received a doctorate in music from the University of Washington. In his early twenties only he has performed in 150 concerts in a year. He has worked with many international bands like The Beatles, Shanti as well as renowned artists across the globe. His first solo release, Making Music, received rave reviews worldwide. Zakir Hussain came into headlines with his album Planet Drum, in collaboration with Mickey Hart which received a Grammy for the Best World Music Album in 1992. He has composed the music for several movies like heat and dust. He has received a host of awards in India too. Zakir Hussain gained attention with his solo and group performance. He has performed in and Europe. He also collaborated with many musicians from all over India and the world. As he moved to perform at international levels his career has escalated with lots of work opportunities. He has worked with many talented musicians in India but overseas also. When he got opportunities to work at level his work amazed the audience across the globe. He introduced fusion music to the world which was quite new to every audience around the world.  He has worked in international movies too. In movies also he has given an outstanding performance.

1971-He has recorded with an American psychedelic band ‘Shanti’

1975- He has worked with John McLaughlin in a band ‘Shakti’.

Zakir Hussain has given an outstanding performance as music composer also. He has composed music for several movies like In Custody’, ‘The Mystic Masseur’, ‘Heat and Dust’ etc. His music composition for the Malayalam movie ‘Vanaprastham’, was screened at Cannes Flim Some of the other films in which he has contributed as a music composer are Apocalypse Now’, ‘Little Buddha’, ‘Saaz’, ‘Mr. and Mrs. Iyer’ and ‘One Dollar Curry’.  Zakir has performed in such movies which depicted his career as a musical performer. His portrayal of the character ‘Inder Lal’ in the film ‘Heat and Dust’ is beyond comparison. He was also in few brilliant documentaries like The Speaking Hand: Zakir Hussain and the Art of the Indian Drum’ which was released in the year 2003 and ‘Zakir and His Friends’ in the year 1998.

Rolling Thunder-This was solo album by drummer Mickey Hart. In this album musical classical table was performed by Zakir Hussain and his father.

Karuna Supreme–Created by American saxophonist John Handy, which gave another chance to Zakir Hussain to perform at International level. This album was a major success both at the commercial level and at the critics level.

In 1988 Zajir Hussain came up with his own album titled ‘Tabla Duet’. It featured himself along with his father, Alla Rakha.

Padma Shree-Zakir Hussain was the youngest percussionist ever to receive Padma Shree by the Government of India in the year 1988.

Padma Bhushan -In the year 2002  Zakir Hussain was awarded third highest civilian award; Padma Bhushan. He was again the youngest percussionist ever to be honored with Padma Shree.

National Heritage Fellowship- in the year 1999 he became the proud Indian to receive most prestigious honor in the field of traditional arts.

Sangeet Natak Akademi Award-In the year 1991 Zakir Hussain was awarded this He was the youngest musician to ever receive this award. This award was given to him by the President of India.

Kalidas Samman- in 2006 he was honored with this award by the Government Of Madhya Pradesh for his exceptional achievement in field.

In 2016 he received by the then American president Barack Obama. He was the first Indian musician to be invited to attend the All-Star Global Concert held in the White House.

The contributions of Zakir Hussain is vital in shaping the contemporary world music movement. His numerous overseas collaborations taken Indian Classical music to level. He has the world that tabla can be used as main instruments in concerts. He is an inspiration for the young table players and he has opened many gateways to Indo Western musical collaborations.