Kaal Sarp Dosh: Types, Effects and Remedies
In Sanatan Dharma, the planets are evaluated by looking at the human horoscope, and dosha and yoga are included in human life. If Kaal Sarp Dosh is in the sign, there will probably be a lot of problems related to marriage, children, respect, money, work, etc.
When Rahu and Ketu are constantly back in the horoscope of a person and all the other planets are between Rahu and Ketu, it is said that this person suffers from this dosh. The influence of this dosh is different in each rashi. 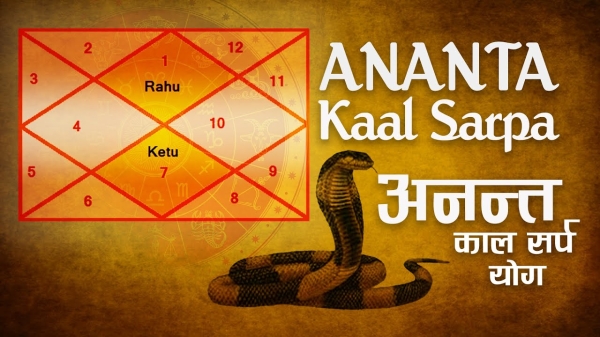 If Rahu is in the lagna and Ketu is present in the seventh house and all the other planets between seven and twelfth, eleventh, tenth, ninth, eighth and seventh houses, it is called Anant Kaal sarp yog. It takes effort to develop the personality of these people. His education and business works in a very normal way, and one had to fight hard to make some progress in this area.
If Rahu is in the 2nd house and Ketu in the 8th house and all the planets between these two planets, then it is called Kulika Kaal sarp Yog. The dosh brings a lot of struggle to native’s life. Due to this yoga, the native's education goes on at a normal pace and his married life is also normal. But due to financial problems, there is a disturbance in your married life.
If Rahu is in the third house and Ketu is in the ninth house, the yoga that formed is called Vasuki Kaal Sarp yog. The person has problems with his brothers and friends. Traveling abroad will be a problem. People with this combination of registers have to take action and pay special attention to legal documents. At the same time, the economic situation is unusual. He had to fight hard for money. 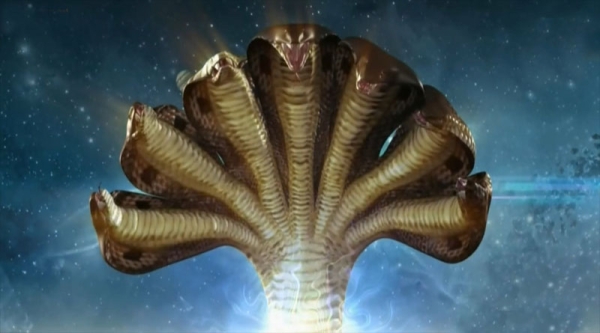 If Rahu is in the twelfth house and Ketu is in the sixth place and the remaining 7 planets are in the fourth, third and first place in the horoscope, then the yog formed is Sheshnaag Kaal Sarp yog. According to the scriptures, people are definitely seen suffering from these yogic obstacles in practice. The wishes of the person takes a lot of time to be fulfiled. Such natives have to go away from their birthplace to earn their livelihood and they always have to be entangled in debate and litigation due to enemy conspiracies.
If Ketu is in the fifth house and Rahu is in the eleventh house, then Vishadhar Kaal Sarp Yoga is formed. Due to this dosha, a person has to bear financial losses. There is a partial obstruction in the acquisition of knowledge for the person. There is some hindrance in getting higher education and there is always a loss of memory power. Despite the possibility of profit from maternal grandparents, grandparents, there are chances that the native has to undergo some losses. Sometimes there are chances of dispute with uncles and cousins. There is a possibility of having a dispute with elder brother.
If Rahu is situated in the fourth house and Ketu is situated in the tenth house and creates with other planets, it is known as Shankhpal Kaal Sarp yog. Due to this, there have been seen some difficulties related to immovable-property. Due to which the person sometimes gets tensed. The native gets some kind of trouble from his mother at some point or the other. Due to the afflicted Moon, the person loses his mental balance from time to time. 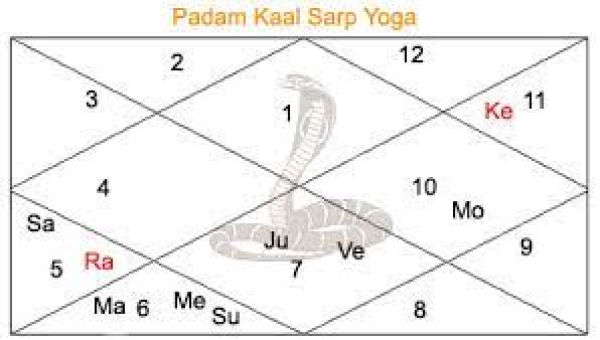 In this, if Rahu is in the fifth house and Ketu is in the eleventh house, together with the Ekadashi Panchang in the 8th house and in the meantime all the planets are there, then Padma Kalsarp Yog is formed. Some problems arise when acquiring knowledge. Along with this, the person often gets the child late, or there is a partial interruption in having a child. The native is often worried about the son and the child. There may also be health problems as well.
If Rahu is in the sixth house and Ketu is in the twelfth house and all the planets are situated between these then Mahapadma Kaal sarp Yog is formed. In this yoga, the person gets victory over his/her enemies and earns a lot of profit in business from abroad, but due to living outside, there is a lack of peace in his house. The person of this yoga can get only one thing, money or happiness. Due to this yoga, the person has to travels a lot in his/her career. 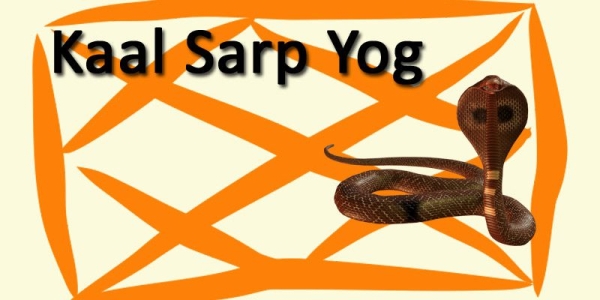 According to the horoscope, if Rahu is in the seventh house and Ketu is in the Ascendant, then such yog is known as Takshak Kaal Sarp yog. The people suffering from this Kaal Sarp Yog do not get the happiness of ancestral property. Such people are also seen to be unsuccessful in love affairs. They have to be deceived even in secret matters. Despite having a normal married life, sometimes the relationship becomes so tense that you try to separate.
Ketu in the second house and Rahu in the eighth house forms the name of Karkotaka, Kalsarp Yog. Due to this yoga, some obstacles definitely come in the fortunes of such people. There are also difficulties in getting a job and getting a promotion. Property also keeps coming and going to these people. No work gets done properly. At the same time, even after working hard, you are not able to get the benefit.
If Ketu is in third place and Rahu is in ninth place in Sarp Dosh birth chart, then Kalasarp Yog named Shankhchood is formed. Many types of obstacles keep coming in the luck of the people suffering from this yoga. The natives have to face many kinds of obstacles in getting the desired success in professional progress, job promotion and studies. The reason behind this is he himself because he wants to snatch the share of his own. He plays with religion in his life. 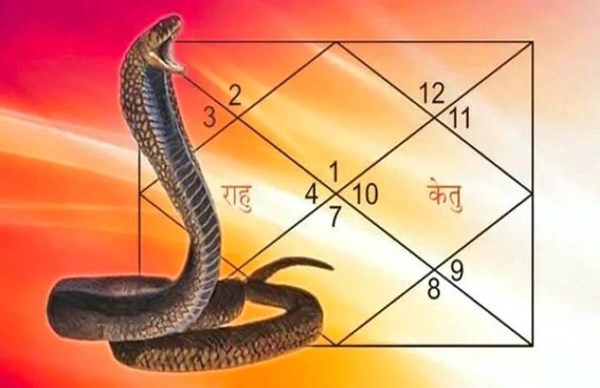 When Rahu located in the tenth house and Ketu in the fourth house in a horoscope forms Kaal Sarp Yog, then such yog is called Ghatak Kaal Sarp yog. If a person born in this yoga serves his mother, then he gets a good house and happiness. The person is always striving for happiness throughout his life, no matter how much happiness comes to him, his life does not fill him.