Home other Importance of Jupiter planet in astrology 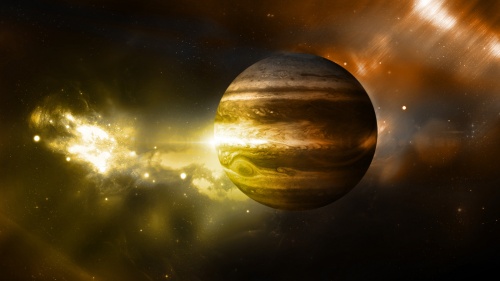 Jupiter is considered to be the largest and most influential planet in the Navagrahas. Jupiter not only has a high position among the worlds, but it is also considered to be the Guru of the Gods. Guru is recognized as auspicious planets. According to astrology, it is the lord of Sagittarius and Pisces sign as well as Punavasu, Visakha, and Purvabhadrapada constellations. Guru is considered as a jewel to give auspiciousness, truth, justice, virtue, and happiness. This planet is considered as the second, fifth, ninth, tenth, and eleventh house factor in the horoscope. It lasts for four months in twelve months. This planet has enmity with Mercury and Venus, while its sight with Sun, Moon, and Saturn is considered auspicious. Mars is also Jupiter's friend planet.

According to astronomy, the planet Jupiter is located about 196 million miles away from the Sun, while about 38 million miles away from the Earth. The diameter of this planet is ninety miles. The day on Jupiter is shorter than that of our Earth and Mars because it completes a cycle on its axis in just 9 hours 55 minutes. It rises one month after it is set, after four months it turns into Vakri and then four months after Margie and then after four and a quarter months. The planet Jupiter lives in a zodiac for about a year and takes about thirteen years to complete the cycle of 12 zodiac signs. Some recent searches have shown that Jupiter has the highest number of 39 satellites. Thus it has also left Saturn behind.

Jupiter and Mythology from a mythological point of view

It is told in Skanda Purana that Brihaspati is the son of Maharishi Angira and he attained the position of Lord Guru and the place of planets by accomplishing rigorous penance of Shiva. On the strength of their knowledge, they offer the Yagna portion to the gods, and they are kind, imparting wisdom and experience to their devotees, take them to the path of glory and bring them happiness and honor.

In the horoscope, it has a complete vision on the fifth, seventh, and ninth houses from Jupiter. Jupiter has good fruit related to the expressions on which it is sighted, but the sense in which it is situated is lost. In Sagittarius and Pisces, it is beneficial; in this condition, it gives benefits in the mind in which it looks and the expressions it looks at. For Virgo and Gemini ascendant, it is considered as a barrier.

Jupiter in hand linear astrology: (Jupiter & Palmistry)
In palmistry, it is known as Guru Parvat. Saturn, Rahu, and Mars surround this mountain under the index finger in the palm. The position of Guru Parvat is considered very important in palmaceous astrology. If there is a sign of a square or circle on this mountain, one gets a lot of success in the field of literature and also gets Laxmi's blessings. Having this type of sign-on Guru Guru also shows that the person is quite ambitious. The sign of multiplication on this mountain indicates being wise and marrying the girl of choice. If any line reaches the Guru mountain from the fate line, it is considered a sign of getting lucky and respected.

Sum of other planets with Jupiter -

Jupiter + Sun - Yoga of Jupiter and Sun is very auspicious. It is called Jeevatma Yoga. The personality of such a person is very influential and gets an excellent social reputation. There is an interest in religious works, and a person has good positive power.

Jupiter + Moon - The horoscope of Jupiter and Moon is very auspicious; it is also called Gaja Keshari Yoga. This yoga will increase prosperity. Such a person has a calm mind and a special affection for his mother.

Jupiter + Mars - Due to the combination of Jupiter Mars in the horoscope, the person is fearless and mighty, and he is ahead of the competition, such a person is also some egoistic.

Jupiter + Mercury - In the horoscope of Mercury Jupiter, the person is knowledgeable, deeply thinking and visionary, such a person has excellent reasoning skills, keeps ahead in calculative work and can prove all the tasks with the help of his intellect.

Jupiter + Venus - It is good to have Jupiter Venus in the auspicious house, and it increases the fruits of the emotion, such a person has artistic talents and moves forward in creative works.

Jupiter + Saturn - The combination of Saturn and Jupiter is very auspicious, if you are in a promising position then you get a higher place: It is suitable for career, such a person does his work with full devotion. It increases spiritual instincts and provides esoteric knowledge.

Brihaspati + Rahu - Jupiter Rahu's yoga is harmful, and it is called Guru-Chandal Yoga. By having this yoga in the horoscope, the person is angry, there are obstacles in education, the person's prudence power is weakened in the sense in which this yoga is Loses that feeling, hinders childbirth.