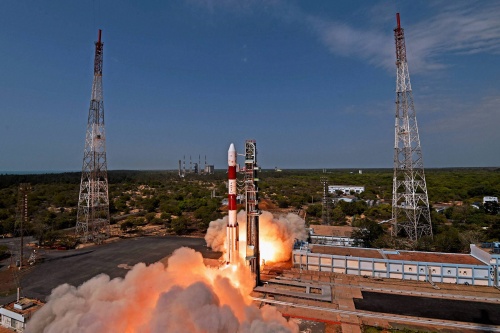 India’s second Lunar mission was successfully launched on 22nd July 2019.  Again, India has proved its technological power and the ISRO has again shown they are the best around the globe. The main aim behind the launch of Chandrayaan-2 was to touch down the South Pole of the moon, where none other country has reached yet. The technological aspect is known throughout the world. But here we will have the scanning of Chandrayan-2 through the astrological lens.

So here it is very important to note that ISRO has planned the launch of Chandrayaan-2 on 15th July 2019, when ISRO was all set to launch the second Lunar mission, at 02:51 AM at Satish Dhawan Space Centre at Sriharikota in Andhra Pradesh, just 56 minutes before the launch time, it was aborted due to technical reasons. ISRO was compelled to suspend the launch of Rs. 978 crores Chandrayaan-2 project.

When we talk about the pre-scheduled date and time of the launch of Chandrayaan-2, that was 15th July 2019. The natal chart of the Chandrayan-2 at this date points out the placement of Ketu in 12th house and Jupiter in the 8th house which represents loss and destruction. When we start any new project or mission, the time consideration or the Muharat plays a vital role.  So, when we analyze this chart of the pre-scheduled date, the major house which contributes to the auspicious timing for a new venture that is first and the ninth house seems to be disturbed. As the ascendant is falling in Taurus sign and Jupiter in the first house of the natal chart depicts inauspicious timings.


Again, the placement of Venus is combusted and its union with the Sun and Rahu is inauspicious. Saturn is the lord of the Ninth house, which is badly placed in the eighth house. The union of Saturn and Moon is troubled by Ketu.

The third and the 12th house of the natal also plays a vital role in the matters related to travel and Journey. In this natal chart, the lord of these two houses and not well placed. The moon which the lord of the third house is badly placed in the eighth house, accompanied by Saturn and Ketu forming inauspicious tangent. Mars which the lord of 12th house has become debilitated in the third house. The union of Mars with Mercury is also under the inauspicious aspect of Jupiter (which is not a friendly planet for Taurus Ascendant).

The conclusion of this analysis comes with the statement both the primary as well as secondary (specific) attributes of this Muhurata Ascendant are severely disturbed. In addition to this, the operational Mahadasha is of badly placed Ketu; and, antardasa is of debilitated Mars. So, the best decision was taken by ISRO to reschedule the launch from the astrological lens although the reason was technical.


When we analyze the reschedule date chart of Chandrayaan-2, we will find that Jupiter which is a very supportive celestial body is placed in the first house. When we see the ninth house it is occupied with ascendant Lord Mars and its union with the Sun and the supportive Jupiter is auspicious. The placements of other planets are also having positive effects.


But here one aspect to be noticed is that ascendant Lord Mars is combust and detailed and the positioning of Mercury in the union of Sun and Mars is not desirable. Venus which is the lord of 12th house is badly placed in the eighth house. The union of Rahu and Venus can not be considered auspicious. The lord of the third house Saturn is symbolizing companionship with Ketu placed in the second house. The mutual influence of Saturn and Mercury seems not so positive.

Saturn and Jupiter are the primary signifiers of any orbital space mission. Scorpio was in a rising phase at the eastern horizon with the placement of retrograde Jupiter in the first house. At the rescheduled date the planetary positions of the major planets were in a watery sign. As both the Saturn and Jupiter are retrograded. The placement of Jupiter was in the ascendant phase with the transition of Moon, so the Chandrayan-2 mission was initiated under the influence of Saturn Mahadasha and the antardasha of Mercury.

As the event chart shows, that the major planetary positioning was in a watery sign. It symbolizes that the team may have to spend some extra effort to get moving out of the earth's orbit. But the pleasant news is that the mission Chandrayaan-2 will remain trouble-free due to the positioning of Jupiter. The positioning of Jupiter will be resultant in a positive aspect at the expected date of arrival of Chandrayaan-2 on the moon surface. It seems that the journey of Chandrayan-2 will be trouble-free. The positioning of Saturn will also play a vital role in the mission of Chandrayan-2. So here it can be expected that India will get to know some unknown secrets regarding the Lunar soil and other admiring facts that will be revealed regarding the Moon surface. ISRO will achieve all primary objectives related to the Chandrayan-2 mission due to the direct motion of the transiting Jupiter.

When we have combined astrological analysis of all the factors it indicates that ISRO will succeed in the mission Chandrayan-2. The Chandrayaan-2 is the most complex mission ever as it will attempt to soft-land at the predetermined site close to the lunar south pole. The call-off of the first scheduled date may have disappointed so many Indians, but the rescheduled date will surely mark a historic success of mission Chandrayaan-2 according to astrological analysis. So here I convey the best wishes and regards to the team ISRO and India will take the next leap in the field of mission Moon with Chandrayaan-2.