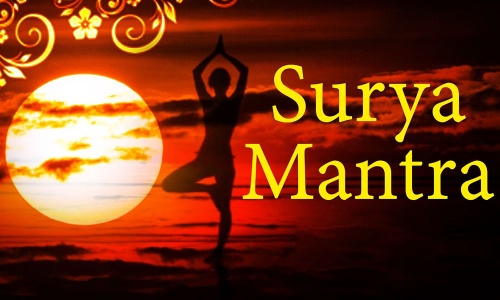 Sun being the largest star of system is very important in each aspect. The temperature on the sun is far too much for any living thing to bear but it’s very influential on the life of each individual on Earth. The chanting of mantras has always positive effects on the devoted souls as well as . The chanting of mantras with full devotion is one of the to connect with God and find within your soul and conscience too.

As the sunrise dispels that darkness of the worlds, Surya also removes the darkness of ignorance and bestows wisdom. Sun is said to be the embodiment of all knowledge. Sun constantly shines on the earth and there is nothing on this earth that can be hidden from him. Sun is called as Sakshi (The ever watching witness to every happening).

The mantras are the syllables when articulated with full devotion in order to seek the blessings of the concerned God. Surya mantra is chanted in order to praise Sun god and seek health, wisdom prosperity. Sun god is also known as the “” – the only God visible to us every day. The Sun God is “Karma Sakshi”, who has eternal wisdom and knowledge. He is the Source of all life, and it is because of him that life exists. Thanks to the energy from his rays, life on Earth is sustained. Surya Mantras have been chanted by people through all the ages to propitiate the Lord Sun.

I bow down to the Sun God who is the cause of the , who dispels all darkness, who destroys all who is matchless in brilliance, who is the son of Kashyapa and who is as red as a Japa Kusuma flower.

Sun (Soorya-Ravi) I pray to the Sun, the day-maker,
destroyer of all sins, the enemy of darkness, of great
brilliance, the of Kaashyapa, the one who
shines like the flower.


How to Chant Ancient Surya Mantra

For the effectiveness of the Ancient Surya Mantra, there are which every devoted soul should follow to remove negativity from body, mind, soul home. After following these steps surely one will get desired results and be blessed with divine blessings of Sun God. When an individual starts chanting Mantra related to a particular deity regularly the gap between him and the concerned divine force steadily decreases. By regular use of Mantra a subtle link is formed and through this one could then obtain any desired boon within the power of the deity. A person can obtain wealth, prosperity, fame, fearlessness, success and spiritual upliftment.

The ancient Surya mantra has power to praise Sun God.

It is said the best time to chant Surya Mantra is early morning. (sunrise)

Start chanting it daily during sunrise after taking a bath. It should be chanted 108 times using quartz crystal beads.

Sit on a red cloth facing the sun while chanting a mantra.

Try to begin the chant of ancient Surya Mantra on Sunday during Shukla Paksha (waxing phase of moon).

The devotees should light a lamp preferably with ghee.

After the chanting of Ancient, Surya Mantra water to the Sun God.

It is better to pour this water as an offering to Surya Deva to the roots of a plant.

While offering water to Sun Lord, offer it 7 times along with reciting the Ancient Surya Mantra. Doing this is very helpful and the results will be tremendous in case a person decides to wear red clothes.

For the effective the Ancient Surya Mantra should be recited with full devotion for 10,000 days.

Once the 10,000 days are completed try to maintain of chanting Ancient Surya Mantra for at least 108 times a day.

To get the fullest benefits to chant Ancient Surya Mantra four times on Sundays after following the same procedure.

Once the devoted soul continues chanting the Ancient Surya Mantra. They will notice the release of negative energies from Mind, body, soul home. The chanting of Ancient Surya Mantra has on the positivity of the devoted souls. Devotees of Sun God are blessed with wisdom and prosperity, health. According to Hindu Lord Rama prayed to Surya for strength and a victory before battling Ravana. Lord Surya is believed to grant intelligence, confidence, good health, courage, strength, leadership qualities, independence, fame, success, power and many more boons to his devotees. There are benefits of Chanting Ancient Surya Mantra. Some common benefits are listed below.

The devoted soul feels more connected to Lord Surya and filled with positivity.

The chanting of Ancient Surya Mantra is the ultimate tool to pray for a male child in the family.

The recitation of Ancient Surya Mantra will enhance the power of speech.

The brightness of the Sun grants knowledge and power.

The chanting of Ancient Surya Mantra will let the devotees get over their enemies.

Planet Surya blesses us with  status and position in our society and work field.

The chanting of Ancient Surya Mantra will let the cleansing of ego, anger, greed, desire treachery.


The chanting of Ancient Surya Mantra with full concentration produces positive energy and divine blessings from the Sun God. It purifies your mind, strengthens your body and uplifts you spiritually. This Mantra removes all the harmful effects of the planet Sun in your zodiac horoscope. According to Hindu Mythology Sun God is depicted with riding Seven horses. The seven horses denote our seven levels of consciousness, the seven chakras in our body and seven days of a weak.  So the powerful chanting of Ancient Surya Mantra leads to the divine blessings of positivity inside the soul, calmness of mind, healthy body, elimination of negativity from home.

9 Common Spiritual Symbols - How To Use Them

The Perfect Workout of Your Zodiac Signs

How does yoga affect your health?

How to Improve Memory Power