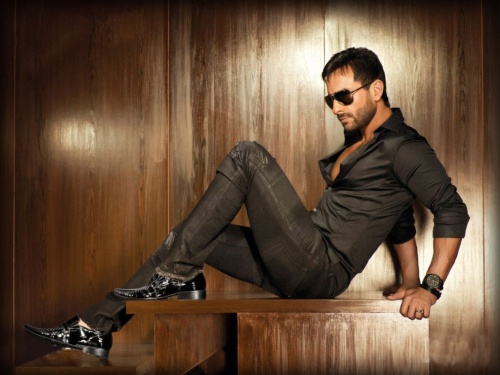 Saif Ali Khan is a well-known Indian movie actor and producer. He is the son of famous cricketer Mansoor Ali Khan Pataudi and Bollywood actress Sharmila Tagore. Saif Ali Khan was born in New Delhi, India on 16 August 1970. His father was a former captain of the Indian cricket team and his mother was a film actress from 1952 to 1971. His father held the title of 9th Nawab of Pataudi that is located in Haryana. He started his education at The Lawrence School, Sanawar in Himachal Pradesh and then he moved to Lockers Park School in Hertfordshire when he was only 9 years old. After that, he joined Winchester College for further studies. After completing his graduation, he came back to India and worked for an advertising film for two months in Delhi. After that, he appeared in a TV commercial before starting his career in movies.

In the year 1991, Saif Ali Khan was cast in the movie named Bekhudi but later he was replaced by Kamal Sadanah. During this film, he met the famous Bollywood actress Amrita Singh and they got married in October 1991. With this marriage, she gave birth to a daughter Sara Ali Khan and son Ibrahim in the years 1995 and 2001. Later, they got separated in 2004. He made his Bollywood debut in the year 1993 with a movie named Parampara. For his movie Aashiq Awara, he got a Filmfare award for the best male debut in 1993. Later, he appeared in a movie named Main Khiladi Tu Anari along with actor Akshay Kumar. He got a Best Supporting Actor nomination at the annual Filmfare Awards for this role. In the 1990s, he appeared in 9 movies from 1995 to 1998 but all of these movies were critically and commercially unsuccessful.

After these 4 unsuccessful years of his career, his career began to improve in the year 1999. He appeared in the movies like Yeh Hai Mumbai Meri Jaan, Kachche Dhaage, Aarzoo, and Hum Saath-Saath Hain. In his career, he appeared in lots of Bollywood movies in the lead and supporting roles where he got lots of success. He also got several awards in his career, including the Filmfare award for best supporting actor in the movie Dil Chahta Hai. He became one of the well-established and recognized actors in Bollywood in his career and he also became a producer for several movies in his career. In the year 2005, he won the best actor award at the 52nd National Film awards for his movie named Hum Tum. Recently, he appeared in Netflix original series named sacred games and he was appreciated worldwide for his acting in this series.

Today, he is one of the high profile and highest-paid actors in Bollywood. In the year 2007, he started the relationship with Kareena Kapoor and they got married in the year 2012. They also got a son named Taimur in December 2016.

Ascendant of Saif Ali Khan is Gemini and Venus has the aspect to the Lagna.

The aspect of the Venus of Virgo made him handsome, attractive and popular. His 2nd house has Mars and a sun. Saturn and Mars have niche Bhanga and it is involved in Nicha Bhanga Raj yoga. According to his horoscope, he is working hard towards his leadership skills, discipline and capability building. Because of the positive qualities of Saturn and Mars, he is getting success in the career as well as life.

He has Mars and sun 2nd house from the Ascendant and Mars and Sun are placed in the 10th position from Arudha Lagna. 11th from Arudha Lagna has Ketu and mercury that are an indication of the benefits from foreign Ventures with his communication and trading. Because of his 2nd house Arudha having Venus, there may be additional expenses in his luxurious lifestyle, vehicles, traveling and women.

His Arudha Lagna has Jupiter that means he was born in the royal family. 11th Lord of Varnada Lagna and Hora Lagna Lord Venus indicates that he will generate income from the endorsement, films, modeling and acting career. According to the horoscope of Saif Ali Khan, he is going to have a successful career and a happy life with his family. He is definitely one of the most famous personalities because of his horoscope.