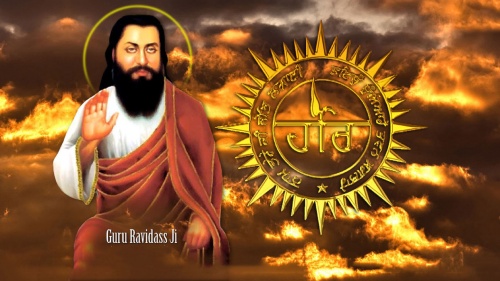 Gone were many days, there are who are unable to think above the caste and creed system in India. Many saints, social reformers, philosophers took birth in the pious land of India and tried effortlessly to abolish the caste and creed system from the country with different movement. One of the greatest movements was the Bhakti movement and Guru Ravidas Ji was the active member in it.

Today, in this piece of content, we are going to put our glance on the facts of Guru Ravidas Ji who is considered one of the eminent figures in Indian history and social reforming movement in 15th Century. He was a thinker and he condemned the hierarchical system in Indian society.

Shri Guru Ravidas Ji was famous in the name of Raidas. He was a poet, social reformer, saint as well as a philosopher. He was an ardent devotee of God. He was the part of Nirguna Sampradaya (Sant Parampara) and he had carried out a significant role in North Indian Bhakti Movement. Ravidas was a spiritual leader for people. His devotees are known as Ravidassia. His preaches are known as Ravidassia Panth. He took birth in the Harijan caste. He was a great devotee of God and the copious faith in God took place in his heart from his childhood.

This was not the end of his life. He had a long way to walk and so many things to do for the sake of people. So, he did and he contributed a couple of years of his life to bring wellness, happiness and prosperity for the people belonged to lower caste. He had written so many poems, pads, and devotional songs.

Facts You Should Know about Ravidas Ji – The Saint

Ravidas Ji was one of the influential figures in the 15th Century and it is denoted by his social movement for reformation and enlightenment. Let us reveal some of the Unknown facts about Guru Ravidas Ji that make you inspired and give you a new vision to live life.


Guru Ravidas Ji believed in Karma. He believed that only Karma can bring the power to get rid of salvation the birth. He fought vigorously against the caste system and believed anyone can build a relationship with God with the pure believe, conscience and devotion towards God.