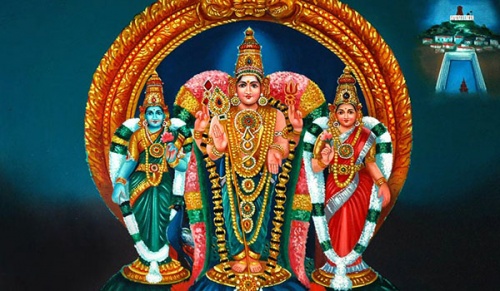 Whenever holy beings got threatened by demons, they prayed for help from Trimurti – Bramha, Vishnu Shiva. The situation was quite the same when three demons – Surapadam, Simhamukha Tarakasura started to torture human as well as deities. They created havoc in – Swarg, Marta and Patal (Paradise, Earth and, Hades). Among the three demons, Surapadma had pleased Lord Shiva with his tenacious austerities and, managed to secure boons from the divinity Shiva. No doubt, he started to misuse the power of blessings with the company of his two brothers. From deities to monks, Brahmins to general people and, even nature did not get rid of the oppression of these three demons.

It was not that these three demons were able to continue their oppression. The son of Shiva took birth and demolished the demons in a massive battle and, regained the power of deities in Paradises. To celebrate the victory over evil power, Skanda Sasthi is commemorated till today. Most of the states in South India, celebrate Skanda Sasthi with rituals in a grand manner.

A Brief On Skanda Sashti and Why It is Celebrated?

In this piece of content, we are about to discuss the Significance of Skanda Sashti with the story behind the birth of Lord Kartika, aka worshiped as Skanda, (In Tamilnadu), Guha, Shanmukha, Kartikeya (In West Bengal) and Velayudhan. The worth of worshiping Kartikeya is to be blessed with the power to abolish evil power which still exists in the society in the name of cruelty, poverty, caste and creed system, corruption and so on.

Every year on the sixth day of Shukla Paksha (New Day) in the month of November (Aipapasi in Tamil) the Skanda Sashti is celebrated. It is said that Skanda (Son of Lord Shiva and Parvati) killed Surapadam, Simhamukha Tarakasura on the sixth day of Sukhla Paksha in the month of Kartika (October-November). day of new moon day is called Sasthi. Hence, the celebration is well-known as Skanda Sasthi.

Story Behind Birth of Skanda

Digging the story behind the birth of Kartikeya or Skanda, you come across a new dimension of Lord Shiva’s life. Devraj Indra to all other deities of Paradise was in a fix. They could not be able to find any way to suppress the cruelty of these demons. Without finding any solution, they visited Brahma, Vishnu Shiva in search of a way out. Brahma and Vishnu were unable to stop the oppression of these demons as Surapadma, Tarakasura and, Simhamukha received boons from Lord Shiva. According to the boon, Lord Shiva not himself could kill the demons whereas his power can abolish the demons.

Brahma’s Suggestion: Brahma suggested that only the predecessor of Lord Shiva could demolish the demons. Lord Shiva was absorbed in penance that time and it was not easy for deities to make him agree to birth a child.

Failed Plan to Arouse Amorous in Shiva: Deities had made a plan and sent Manmata (Kama Dev) to arouse amorous feeling in Lord Shiva with his arrow. Lord Shiva got furious with such step and burnt Manmata into ashes. Though, with the prayer of deities, Lord Shiva brought back the life of Manmata. They also prayed Lord Shiva to give birth a child that to demolish three demons.

Skanda Took Birth: Shiva is compassionate and he gave the word to give birth to a child. From the third eye of Shiva, six sparks were released and immersed into the river of Saravana. Six children took birth from those six sparks and they were named, Kartika Sisters. One day Devi Parvati went to the six children and hugged them together. The six children were merged into one, the Kartika.  Though he had six faces, and as a consequence Skanda born.

Skanda was just a boy with matchless power and unfathomable knowledge. He mastered the warfare skill at an early age. He was gifted a Vel by Devi Parvati. He was too brave to declare war against the demons and he did.

Skanda killed Simhamukha and Tarakasura in the Veera Mahendrapur city. He involved in a vicious fight against Surapadma and pierced the body of Surapadma with the Vel (lance gifted by Devi Parvati). a Peacock and cock came out from the body of Surapadma. The peacock became the (vehicle) of Lord Skanda or Kartika. The cock remained in Kartika’s flag and sang praises for Lord Kartika.

In the year, Skanda Sashti 2019 will be celebrated on 2nd of November. The day is also known as Soora Samharam. Though, in each month on the sixth day of new Skanda Shasti is carried out by a large number of devotees. The dates of Skanda Sasthi in each month in 2019,

Devotees keep fast and perform many rituals to worship Subramanya. The Skanda Sashti 2019 date is already known to all of the ardent devotees of Lord Subramanya. If you are the one who does not start your day without the name of then note the date of Skanda Sashi 2019. You can keep fast even on every Skanda Shasti in every month to please your lord and pray boon.