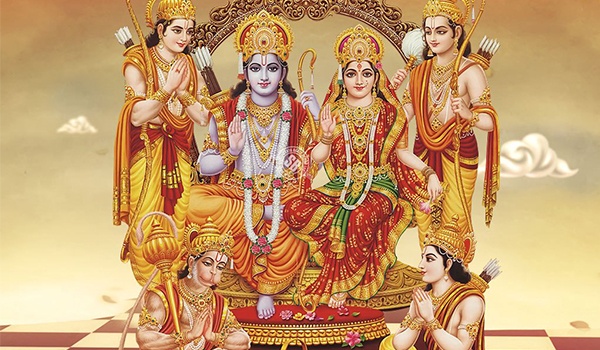 
Vivah Panchami marks the day when Lord Rama and Goddess Sita tied the sacred knot and got married. It is observed on the fifth day of the Shukla or waxing phase of moon in the Agrahayana month i.e. November or December according to the Maithili calendar. This day is celebrated with great fervor in the temples in the Maithili region of India and Nepal. It is also known as Vivah Utsav.

According to the Ramayana, King Janak of Mithila (Janakpur) and father of Goddess Sita organized a "Swayamver" ceremony for her daughter Sita where he invited the kings from various kingdoms. any King could only marry princess Sita if he could lift the Shiva and string it. Thousands of kings and prince tried but could not even move it an inch. It was Lord Rama the prince of Ayodhya who lifted the gigantic Shiva (bow) and it. Thus he won the heart of Goddess Sita and married her.

To commemorate the wedding ceremony of Lord Ram, and Devi Sita, devotees have been celebrating the festival of Vivah Panchami with great dedication and devotion.

This year Vivah Panchami will be celebrated on 12th December, Wednesday.

The celebrations of this auspicious day continue for a week. The divine marriage is once again hosted in the temples following all the rituals. On the day of Vivah Panchami, the idols of Goddess Sita and Lord Rama are decorated as bride and groom with jewels and flowers. Then the Pandit of the temple conducts the marriage ceremony of the divine couple and performs the yajna and the rituals followed in a Hindu marriage. Ramleela is also organized in several states to commemorate the day. Women and men gather to chant shlokas in praise of both Goddess Sita and Lord Rama.

Ram and Sita are considered as the supreme couple and are considered an epitome of love and marriage. Their divine union symbolizes the completion of human life. On the day of Vivah Panchami, devotees organize puja at their homes for Lord Ram and Sita. Observing on this day is considered auspicious and it is believed one shall receive the blessings of the Lord by doing so. The fast starts early morning through the night. It is a which means that the devotees do not even consume water all day and conclude the fast on the next day morning after repeating the puja.  Vivah Panchami is celebrated to bring harmony the family.

Vivah celebration takes place in the Janaki Temple for seven days. The entire temple is decorated as a "Mandap" during this time. The idols of Lord Ram and Sita are brought to the Mandap, like a bride and groom and are then married. The divine wedding ceremony of Lord Ram and Devi Sita takes place with great fervor here.