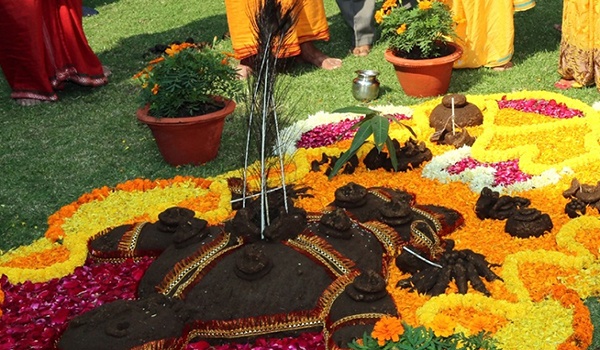 Mostly the day of Govardhan Puja falls on the next day after Diwali Puja and it is known to be the day when Lord Krishna defeated God Indra. On certain , there might be one day gap between Diwali and Govardhan Puja.

As per the Vedas, Govardhan Puja must be celebrated during the Pratipada Tithi of Kartik month. Depending on the beginning time of Pratipada, Govardhan Puja day may fall one day before the day of Amavasya as per the Hindu calendar.

Gowardhan Puja is also called Annakut Puja. On this day food made of cereals like wheat, rice, gram, flour leafy vegetables are cooked and offered to Lord Krishna.

Padva-In Maharashtra the same day is known and celebrated as Bali Pratipada or Bali Padva. The reason for celebration is different here; the day commemorates the victory of Vamana, (an incarnation of Lord Vishnu), over King Bali. It is also believed that Bali was pushed into the dangerous and undiscovered world called Patal Lok.  As per the mythology on this day Evil King Bali returns to Earth from Lok due to the boon by Lord Vamana to him,

Govardhan Puja Vidhi-The cows are worshipped during the Govardhan Puja. is considered very respectful, auspicious and godly in the Vedas. It is believed that through her milk, cow spreads wealth and prosperity all around. Devotees bathe early morning after applying oil on the body. Cow, calves buffaloes are worshipped and red or yellow color is applied them. After which they are offered food, If you do not have a cow at your home, you must go to some cow shed and offer food to the cows there.

Govardhan is also called 'Annakoot' which means a 'Mountain of food'. It is a customary ritual to prepare or one hundred and eight varieties of dishes which is offered to Lord Krishna. This offering is what we call 'Bhog'.

In Mathura and Nathdwara, the idols in the temples are bathed in milk and are decorated with new clothes gems. After which they are worshipped. The is presented in form of a mountain and offered in front of the idols as per the customs.

History-Govardhan puja is celebrated to understand and value the power of right over wrong. According to the it is said that Lord Krishna once motivated and showed the righteous path of worshipping the Govardhan mountains as the healer to the people of Gokul instead of Lord Indra. He them that it was the Govardhan mountains that had saved its people from any natural disaster and was a source of food and shelter and it was not Lord Indra that helped them flourish. The disciples began to do so and stopped worshipping Lord Indra, who on observing this got enraged. Since Indra is the God of Rain, it began to rain massively in Gokul to an extent that the people could drown. Lord Krishna saved their lives by defeating the envious Lord Indra and ever since then this day is celebrated by performing Govardhan Puja.