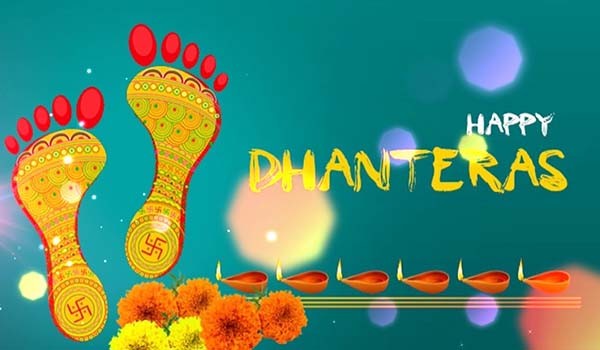 The auspicious festival named Dhanteras is a very important and renowned festival the country. This year it will be celebrated on  13th November 2020, Friday. Dhanteras marks the beginning of the five days long Diwali and is celebrated with great devotion and a number of rituals are associated with the festival. 'Dhan' means wealth while 'Teras' means thirteenth. Dhanteras is observed on the thirteenth lunar day of the Krishna Paksha according to the Hindu calendar and it occurs between October and November.

Dhanteras is also known as Dhantrayodashi and it is believed that on this day Goddess Lakshmi incarnated from the ocean during the churning of the Milky Sea. Hence, Goddess Lakshmi, the goddess of wealth and Lord Kubera who is the God of abundant wealth, is worshipped on the day of Trayodashi. Though, Lakshmi Puja on Amavasya just after two days of Dhantrayodashi is considered to be even more important.

Rituals-
We do not recommend performing Dhanteras Puja during the Choghadiya Muhurat as those Muhurtas are apt only for . The best suited time for Lakshmi Puja on Dhanteras is during Pradosh  because this is the time when Sthir Lagna prevails. literally means fixed i.e. non-moveable. To understand its importance, you must know that if Dhanteras Puja is done during Sthir Lagna, Lakshmiji will stay at your home; hence there is no better time than the Pradosh Kaal. Vrishabha Lagna is considered as the stable time and mostly overlaps with Pradosh Kaal during Diwali.

The day of Dhanteras is also observed as Dhanwantari Triodasi or Dhanvantri Jayanti. It is the birth anniversary of the God of Ayurveda. Yamadeep is also another popular ritual on the same Trayodashi Tithi in which a lamp () for the God of death is lit outside the houses to ward off any ill-timed death of any member of the family.

It is also considered a necessary custom to buy new , utensils or clothes or start new work on this day along with performing the Subh Dhanteras Puja. This brings prosperity at both work and home and whatever you buy shall multiply with the blessings of Goddess Lakshmi.

Dhanteras Puja is performed during the night. Devotees clean the entire house and the place of worship and wear new clothes. A new idol of Goddess Lakshmi is placed in the temple or at the place of worship. Lakshmi Puja mantra and Aarti is performed after which the (earthen lamps) are placed in the corners of the house. Some people also worship animals, cows on this day. In some parts of the seven food items are also worshipped. It is considered that by doing so the coming year will be prosperous.

Pradosh Kaal Muhurat 2020-
Here we are mentioning the exact timings of Dhanteras Puja for a prosperous year ahead. The Muhurat times contain Pradosh Kaal and Sthir Lagna while Trayodashi is prevailing. The Muhurat is based on i.e. 24-hour clock with local time of New Delhi.