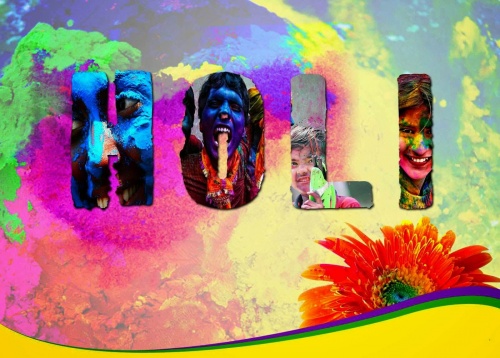 Festival of love, sharing and caring is Holi. It is also called the festival of colours which is celebrated for two days according to Hindu rituals. This festival is a festival of Spring - in the months of February and March, comes after winter, so played with colours to show happiness. Festival starts with Holika Poojan and ends with colours. Two days out of which one is called Chhoti Holi or Holika Dahan and the other day is called Dulhandi or Rangwali Holi.

This is a Hindu festival but with the course of time, this festival has spread to other countries including England, USA, and Australia, among others. This year, Choti Holi will be celebrated on 9th March 2020 and Dulhandi will be on 10th March 2020.

Things you need for Holi Poojan -

How to start Holi Poojan -

Holika is burnt in the evening at the shubh muhurat so that children and the other family members stay in good health. Also, the fire when lit, it is assumed it burn all types of evils and bad souls. As per Hindu traditions and holi rituals, it is considered highly inauspicious to lit the bonfire for Holika Dahan before the Sunset. As per sources, it is said that when the bonfire or Holika Dahan is done before sunset, it brings a lot of misery and misfortune in the life.

It is supposed to be performed on the panchang timings. Panchang is an astrological book which tells the pooja timings and muhurat. When Holika Dahan is performed, youngers take blessings from elders. There is a tradition to offer wheat and gram fully grown to the bonfire and roast them which later distributed as Holika Prasad.

Holika story - Holika Dahan is done to celebrate the victory of good over bad. Hiranyakashyap who was a bad evil asked his sister Holika to kill his son Prahlad. Holika tried to fulfil her brother's wish she sat with Prahlad in the bonfire. The reason Hiranyakashyap wanted to kill his son that he worshipped Lord Vishnu and not his father Hiranyakashyap. Holika had the blessing of not getting affected by the fire. When Holika sat with Prahalada in the fire, he was saved and Holika was burnt to death by the grace of God Vishnu. The celebration of Holika Dahan is carried out in order in the remembrance of the Holika.

After choti holi, the next day is called rang wali holi or dulhandi. On this day, people play with colours, water, balloons etc. This day is considered to spread love and share with each other. This day ladies make special dishes and sweets like Gunjia. Also as a drink, thandai and bhang are served.

In India, the festival of holi is celebrated at a very large scale. There are many destinations where holi is celebrated in a different style. The kind of holi played in Braj areas like Mathura, Vrindavan, Gowardhan, Gokul, Nandagaon and Barsana are very famous. Barsana 's Lathmar Holi is world-famous.

Uttar Pradesh - There are a few rites associated with the Holi festival in Uttar Pradesh. On the eve of the festival, people across the state will take part in lighting the fire. Under the fire, a jar of barley seeds is kept and then on the basis of the condition of seeds, the future harvest is predicted

Mathura: One of the best destinations to enjoy the festival Holi is Mathura. Mathura is the birthplace of Krishna, so in this city, Krishan-Radha rasleela are staged at various places and people play with gulal and water.

Vrindavan: Place full of serenity, devotion and customs on the festival of holi is Vrindavan. On the day of Dulhandi, temples are decorated with colourful flowers. People enjoy playing holi and especially at Banke Bihari temple holi is played with great pump and show.

Barsana: In the barsana, lathmaar holi i.e. laathi waali holi is world-famous. Holi is celebrated in a different style in Barsana where men are beaten up by women in the village. Barsana is famous as the Radha’s home. Lathmar Holi in 2020: In Barsana – 4th March, In Nandgaon – 5th March

Top 7 Tips: Vastu for Office to Bring Prosperity at Work

The best direction to sleep as per Vastu shastra

Vastu Tips To Ensure Good Grades of Your Child