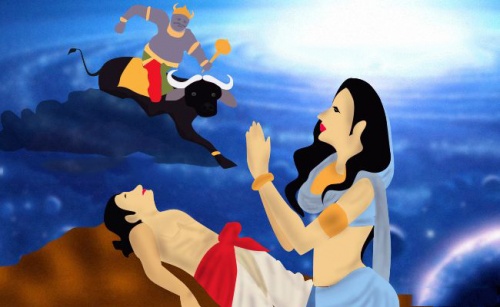 Karadaiyan Nombu is observed on a chosen day when the transition takes place between two Tamil months, namely, Panguni and Massi. It is observed at the exact time when the Tamil month of Massi ends and the month of Panguni begins. According to the Georgian calendar, it is observed in the month of March. This year it falls on March 14, 2018. When a married woman observes fasting on the day, she ensures the long life, good health welfare of her husband. Goddess Parvathi in the form of Gowri is propitiated on the day by offering steamed patties called Karadai and that’s how the day got its name Nombu falls on a Meena Sankranti day when the sun moves from Kumba Rashi to Meena Rashi and is celebrated somewhere during the junction of the Tamil month Maasi and Panguni. The word “Karadai” is the name of special that is prepared especially for this day. It is a special offering to God on the occasion of Karadaiyan Nombu. The word “Nombu” literally means fast or vart. This fast is very common among Tamil married women but is celebrated in other parts of India too.

Shodasa Mahalakshmi Homam- This is the special ritual to be performed on the occasion of Karadiyan Nombu. Shodasa means 16 and each of the forms fame, knowledge, courage, strength, victory, good children, , gold, food grains, happiness, intelligence, bliss, beauty, high achievements, greater thinking and knowledge, morality and ethics, good health and long life. With the worship of Mahalakshmi on the occasion of Karadiyan Nombu the devoted soul will surely get blessings from the Goddess Mahalakshmi.


Sri Sukhta Homam-on the holy day of Karadiyan Nombu the devotes perform very powerful for attracting wealth and prosperity. This powerful is a boon for those devotees who are desperately seeking wealth or suffering from serious financial strain.

Gowri Puja-On the spiritual day of Karadiyan Nombu the married women praise Goddess Gowri by offering special Prasadam prepared for this special occasion only. The Goddess Guari will keep women Sumangali (happily married) and Soubhagyavati (having all fortunes in life). The basic concept is that married women will ensure their safety from widowhood. 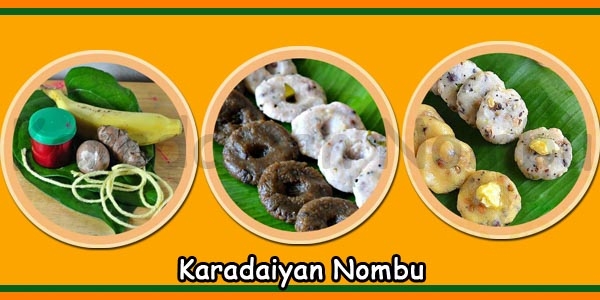 The married women bath early morning on the occasion of Karadiyan Nombu. Karadayan Nombu is also known as Karadayan Vratam or Savitri Vratham. Unmarried girls keep this fast for getting good husband and fortune.

The devoted soul prepares the house for pooja which includes cleaning and decorating with mango leaves and drawing of kolam.

The devotees prepare Karadai thread or Manjal Saradu (Take a yellow thread and tie few flowers and two pieces of turmeric pieces in the middle. When the thread is tied around the neck, the flowers will be like a decoration on a necklace and the turmeric in the center like a pendant) and Karadai dish. ( It is prepared with or gram and fresh butter).

The fast begins at sunrise and ends when Maasi Month ends and Panguni begins.

The devoted souls can have fruits, milk but cooked meals are prohibited on the spiritual day of Karadiyan Nombu.

An hour or half before the exact transition time, place the banana leaf on the kolam or the puja area and place Karadai dish on the leaf.

Other items to place on the leaf are the betel leaf, betel nut, fruits, coconut, banana butter.

Ten minutes or a couple of minutes before the exact transition time, the Nivedita is offered to the goddess.

The devotes offer “Arti” to the goddess Gauri by ringing the bells.

Then the devotee can wear the yellow thread with flowers and turmeric around the neck.

After the fast is broken by eating a Karadai . That which is left on the banana leaf is distributed as prasad along with Karadai dish.

Urugda Venaiyum oru adai nveithan.
Oru yen
(I offer and butter to you. So that my husband and I never separate).

According to the Hindu mythology long ago there was a king named Atapattu. He was of Sun God Savitr and lived ascetically. He is childless and wished for a child to save his lineage. Savitr blessed him with a girl child for his devotion and the girl was named Savitri to the Savitr. She was virtuous and highly talented. The king had told his daughter that she had the freedom to choose her husband. Once when Savitri was moving in the forest, she observed a boy named Satyavan carrying a long pole with two baskets hanging in the ends. In those the blind and aged parents of the boy were seated. Satyavan was serving his parents meticulously which moved Savitri. She her father that she wished that such a noble son became her husband. In order to fulfill her daughter’s wish Astapathi enquired about the . The sage, Narad said that Satyavan was a prince and son of the kingly couple he was carrying. But according to the position of the celestial bodies in the horoscope of he will not live more than a year after his marriage. The Astapathi requested her daughter not to marry Satyavan, as he is having life. But Savitri was persistent in her demand that she would marry only Satyavan.  Ashtapati was helpless and in order to fulfill Savitri’s heartfelt desire to marry he agreed and the marriage happened. Savitri became the wife of Stayavan. Savitri and Satyavan were living in the forest happily for a year following their marriage. However, Savitri was aware that the death of Satyavan was approaching soon. Three days prior to the destined day of death of Satyavan, Savitri takes a vow of fasting and vigil. Although her in-laws suggest that she’s taking too hard of herself, she insists that she has taken an oath to perform them. She was observing strict and was engaged in ardent prayers. On the day when the month of Masi would merge into Panguni, Lord Yama arrived to take away the life of Satyavan who fell dead. Savitri followed the god of death moving with the soul of Satyavan. Lord  Yama was impressed by her approach and wisdom and he granted three boons to

#Savitri asked for the eyesight, Kingdom restoration for her father-in-law

#100 children for her father (Ashtapati)

#virtuous sons to herself (Savitri) through Satyavan

In order to fulfill the third Lord Yama had to leave Satyavan back to live with her. In this way, Savitri won the life of her husband with her diligence, chastity prayers cleverness.

As the Savitri has won her husband’s The married women a long life of her husband and blissful marital life on the of Karadaiyan Nombu. Savitri, the most famous woman and the symbol of chastity was the one who initiated the Karadaiyan Nombu. It is believed that this event happened on the first day of Panguni month. And hence this day is celebrated as the Karadaiyaan Nombu in Tamil Nadu. On this day the married women and Young girls wear Yellow threads and pray to Goddess Gowri for long lives for their husbands. Young and unmarried women practice this in order to find a good husband in the future.

Karadaiyan Nonbu is a festival of special significance to married women all over Southern India including states like Tamil Nadu, Karnataka, Kerala Andhra Pradesh. Karadayan Nonbu is similar to that of Soubhagya Gauri Vratam or Gauri Tritiya which is observed in Andhra Pradesh and Karnataka, Gangaur of Rajasthan, Jyeshta Gauri Vrat of Maharashtra, Hartalika  Teej Vrat Puja of Bihar, and Karwa Chauth of North Indian states. It is similar to Vat Savitri observed in Bengal, Gujarat, Odisha and some other places of India. In Karadaiyan Nombu is similar to Karwa Chauth. The tale of Savithri's conquest of death through a combination of love and intelligence is very well known throughout India and has been presented in many ways.