Home fengshui Yin & Yang is a Philosophy of Balance 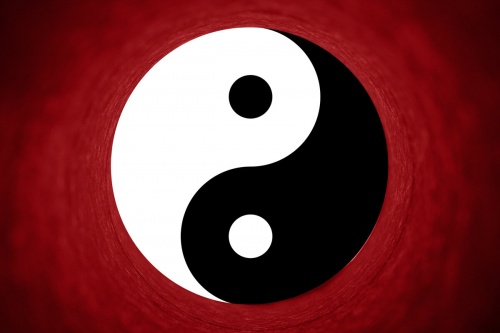 There is hardly anyone throughout the world who is not familiar with the symbol of the yin yang. It is an ancient Chinese belief used within Taoism, both philosophy and religion in China. It represents the balance and harmony in the universe which is an important principle in feng shui, some forms of martial arts, and other eastern philosophies. The concept and symbol of yin and yang is called Taijitu in China.

The earliest evidence for yin and yang were found on oracle bones, the skeletal remains of animals, dating thousands of years ago in ancient China. These symbols depict dual polarity i.e. opposite yet complementary, of every phenomenon in the Universe. As examples: night/ shady side (Yin) and day/sunny side (Yang), female (Yin) and male (Yang). Yin or yang can’t exist in isolation, this one is incomplete without the other. Also, neither pole is superior to the other and an increase in one brings a corresponding decrease in the other, hence to achieve harmony correct balance is essential between the two. What is Universe made of? It’s made of energy and is called ‘chi’ in Chinese. In short energy is the balance between yin and yang.

The cosmologist Zou Yan (or Tsou Yen) is of the view that life went through five phases - fire, water, metal, wood, earth - according to the principle of Yin and Yang these phases interchange continuously.

During the winter solstice (22 December), Yin reaches its heights of influence. Yin may also be represented by the tiger, the colour orange and the broken line in trigram.

Yang is exactly the opposite of Yin:

During the summer solstice (21 June), Yang reaches its height of influence. Yang may also be represented by the dragon, the colour blue, and a solid line trigram.

Salient features of Yin and Yang

They are not absolute when taken alone. Thus they can’t be taken in isolation and have some meaning only when they are taken together. One concludes the other and the other begins. Take for example a day and a night. The night begins when the day ends and vice versa. The absence of one makes the presence of other useless. Thus they are interdependent upon each other.

They are not rigid or fixed but change with time. As the duration of days and nights are not constant and changes with the revolution of the Earth, Yin and Yang are also not static and they flow with time. Transformation of one form into another leads to frequent changes as and when required to balance everything. The best example for an explanation would be of some species of female fish which transform themselves into male fish if there is not enough male population of fish.


When one aspect increases the other reduces its effect to the level that the balance is automatically maintained between the two and the energy is sustained.


Yan aspect of heat can be further subdivided into a Yin warm and Yang burning.

We travel between these two poles of our nature. If we think we are only in Yin or Yang then we are highly mistaken because we keep spinning between these two. Holding onto only one would lead to a flood of chaos and we would end up making our lives miserable.


Yin and Yang philosophy is a Chinese way of Divination. Taoism as a practice enjoys examining bodily patterns. It makes Yin and Yang as the center point from where it makes and examines all the patterns. For example, Qidong is based on the patterns of breath and physical movement. If they are aware of the basis of the bodily patterns then Taoist practice can help keep a body healthy. The upper body corresponds to the Yang, while the lower body depicts the Yin. Yin and Yang meet at the center of the body. Hence the knowledge of Yin and Yang leads you to connect to the Tao practice.


A person is said to be embracing in Yang if he is stuck in a midlife crisis and if he seeks to become a new and better person and challenge to seek wholeness again, then he would be embracing Yin. The person has the choice to either accept the crisis or challenge it with an open mind or to reject the crisis and stay in a weaker situation. He has to look for signs of midlife crisis and then look for counterbalancing answers. If you are not able to recognize yourself as a person you intend to become then start learning to see yourselves from a new perspective and how you would want others to see you.


Yin and Yang even have traces in the galaxy, hence termed as Galactic Yin Yang. It means nothing is left in the Universe which can’t be correlated with Yin and Yang and hence the maintaining of a balance between them becomes highly essential.