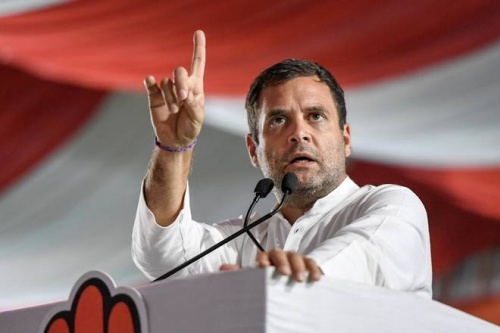 Rahul Gandhi, the scion of the Nehru-Gandhi family, has made debut in the Indian politics in 2004 and successfully contested the general elections held that year from Amethi, the seat was prior contested by his father, Late Rajiv Gandhi. Due to his greater involvement in party politics and national government, Rahul Gandhi was elected Congress Vice-President in 2013, having served as the General Secretary previously.

Zodiac Sign-Gemini- (he is 17th most popular Gemini)

According to the sources, he is a 7th most popular celebrity for the day (June 19) and the 41st most popular for the year 1970.

Rahul Gandhi is born with Libra Ascendant) and Moon is placed in Sagittarius and having Mula Nakshatra (as Star Constellation).  Lord Venus is placed in the 10th house and which is forming quadrant to cancer.

He has Vargottama Jupiter placed in the Ascendant. Adding to this, the Ascendant is also Vargottama. He also has 9th House Lord Mercury Vargottama. Mars and Sun are in “Shuba-Kartari Yoga” in the 9th House of fortune. So, there are many promising astrological combinations in his chart to become an influential political leader.

The horoscope with Libra ascendant with seems very legit also. Debilitated Saturn in 7th house shows his unmarried status and 9th lord Mercury in 9th shows the early death of his father.

As per Jaimini analysis, he was in the main period of Sagittarius which is known for giving significant events both negative or positive. Sub-period was of Gemini, from Karakamsha Gemini falls in his 8th house.

From Gemini 9th house have Rahu and Saturn becomes lord of 9th house which is debilitated in 11th house. 9th is aspected by ganatikaraka Jupiter which clearly shows negative event with the father.

The planetary position of the Rahul Gandhi has no prominent Raj Yog, which is creating obstructions in his political career. Mercury is placed in the eighth house, which is creating adverse situations and not promising a strong fortune.

2019 is going to be a remarkable year for Rahul Gandhi. Especially for the natives with an interest and inclination towards sports or artistic domain. He wants and he can easily manage to make progress, by improving their qualities and talents. This year Neptune’s transit determines a time when their creativity is fueled and they can easily get out of troubles. They will be more grounded in reality than usual and they will take the best decisions.

The financial and professional obligations tend to be the problem throughout 2019, but if they are willing to get involved and do what is necessary, they can accomplish a lot.

Jupiter will encourage Rahul Gandhi to explore new possibilities for improvement and development. The improvements may refer to family life, the natives could relocate in a bigger house or they might start a house renovation project.

The 2019 horoscope for Rajiv Gandhi foresees a favorable year health-wise, with no major issues. it’s up to them to avoid making excesses or putting in danger their physical state.

He feels inclined to different activities that can help him maintain their physical condition.  Moreover, for the single natives, signing up for a dance class or club improves their chances of finding a largely compatible partner with similar interests.

Being single, he will have better times. Rahul Gandhi will be satisfied with his status and will feel optimistic and confident. He can expect pleasant surprises in his love life. Family life is going to be peaceful and happy.

There are chances that he will be attracted to someone special. Love could come from any direction, so he should be ready. Good compatibility(Check your compatibility) is predicted with the Sagittarius, Aries, and Scorpio natives.