Home horoscope The worst thing about each zodiac sign 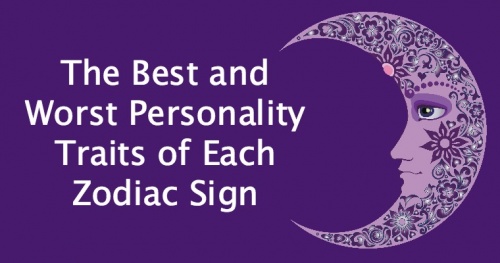 Everyone has certain positive qualities in them and certain negative qualities as well. Together they define who we are as a person. Astrology is majorly about how these characteristics come from our zodiacs and how planetary positions affect our negative zodiac traits and positive zodiac traits. For the ones who believe in it, they would understand how everything works and for ones who don’t, they would say it is their own doing.

Astrology is a science and if it shows us how zodiac signs can affect our lives and how we can change things, it can surely also tell us what could be the worst zodiac traits about us.

Aries
Aries zodiac sign has got themselves into a lot of trouble for not thinking before doing things. They act impulsively sometimes which is why they end up in situations that are not favorable. The same impulsive behavior sometimes makes them insensitive to people around and you would find them interrupting while others are talking.

Taurus
Getting a Taurus zodiac sign to try new things would be the hardest thing one manages to accomplish. If they know how they do things is right, they would not listen to anyone else around them or consider a second opinion. Being rigid on what they believe in is the reason behind this and they fear change as well.

Gemini
Geminis love to talk other's ears off but quite often you would find them to be reserved and very cold to others. They do this to protect their own feelings and themselves but become very harsh for the people around them. It is never easy to get them to share something real about their life.

Cancer
We all know how it ends when we hold things in. People from Cancer zodiac sign are known to hold their resentment with themselves rather than communicating with the person it comes from. This leads to a lot of negative thinking and combining that with their overly sensitive behavior, it becomes a whole thing which can’t be handled easily.

Leo
Insecurity is something that Leo zodiac sign comes with and that sometimes troubles the ones that try to help them. They love to look their best which is why it is very easy to feel insecure for them but the extent of that is so much that you would find them obsessing over the tiniest of detail at the end, which is not fruitful at all.

Virgo
The Virgo zodiac sign has had the most sleepless nights for sure. Their brain works continuously and their habit of worrying keeps them up even when they are asleep. They are very meticulous and perfectionists so until they get things right the way they want it to be, they would be constantly obsessing over what hasn’t been done right.

Libra
Anyone from Libra zodiac sign loves being around people and they also love being social and popular among them. For the same reasons, you will often find them lying about things that were not needed to be lied about. They are often considered pathological liars because of their people-pleasing personality.

Scorpio
Scorpio zodiac sign fears failure and they don’t like situations where they are not controlling it. For them, everything has to be under their own control and they have to be aware of everything in their proximity so that they don’t fail at the task they have at hand. This poses a lot of challenges for them.

Sagittarius
Freedom and free will are important for anyone from Sagittarius zodiac sign so you will find them breaking a lot of promises or not doing things they agreed to earlier. This is because they change their mind later and don’t wish to bound by the promise they made in the past. They easily let a lot of people down because of this trait.

Capricorn
Since we are talking about negative qualities here, Capricorn zodiac sign is the most pessimistic of all zodiac signs and they are too hard on themselves because of that. They always fear the worst and keep themselves on it to ensure that worst doesn’t happen while they are alive.

Aquarius
Self-preservation is above all for the Aquarius zodiac sign and quite often that leads to selfish behavior as well. For them, they come first and that is the priority. They do things for others as well but first for themselves and that is the thumb rule that has to change for them.

Pisces
Sensitivity in every situation is the key worst trait that Pisces zodiac sign half. They take everything to heart and are almost childish as well in their behavior which is why it is hard for people to truly communicate to them in a practical situation.

As much as we embrace our positive qualities, we should also do the same with our negatives from the horoscope and turn them into great things in our life. This is how all zodiacs can tackle even their worst traits from the horoscopes and not be affected by them eventually.