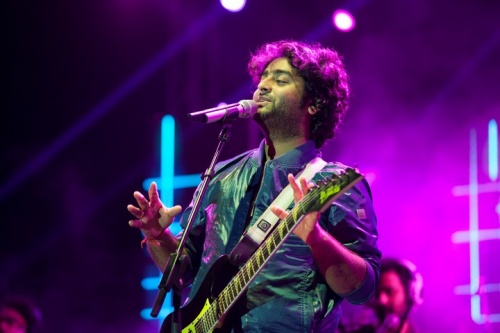 Arjit Singh is a well known Indian playback singer. He is music director, score composer, music producer, recordist and music programmer. In a true sense he has sincere love for the music. He sings predominantly in Bengali and Hindi languages. He was born to a Punjabi father and a Bengali mother on 25th April 1987. He shares the profound love for music since the early days of his childhood. He had learned Indian classical music from his maternal aunt. In 2005, he participated in television music contest “Fame Gurukul”. After that he worked as a music assistant to famous music composer and singer Pritam Chakraborty and then his destiny changed over a time. He has made his debut in Bollywood in the year 2011. (Phir Mohabbat, from Murder 2). His hobbies include cycling, reading, photography etc.

When we analyze the birth chart of Arijit Singh, we can see that the ruling planets are Venus and Mercury. Arijit Singh is ruled by number 7 and the planet Ketu. The positioning of ketu gives him a sound, rational mind and keen insight. His mesmerizing voice is due to his understanding of love and compassion. Saturn is transiting over his natal Saturn in Scorpio and we can expect Mars in Taurus during the entire period. Rahu-Ketu are in half-return phase and are transiting over natal mercury, Jupiter, Venus and Rahu. Sun is exalted in the birth cahrt of Arijit singh. The natal Venus is the contributor of his career in music field.

Arjit Singh is unfortunately passing through a phase of uncertainty and there is a higher effect of the malefic effects of the planets till 30th April 2019.  Despite the malefics being on the rampage, Arijit shall continue to put in his efforts and this will help him to bag more offers. Due to the negative influence of transiting Rahu and Saturn and lack of much support from the current transit of Jupiter, he may find problems in getting good projects during the year ahead.

Arijit is sure to regain glory. He is destined to become one of the greatest Bollywood singers. Arijit Singh is born with such wonderful planetary placements. He will be practicing and trying the different varieties of singing. As the magnificent Stellium of planets in the Sign of Pisces is afflicted due to the presence of the Nodal Axis therein, Arijit’s path will not be easy to earn the glory. But due to his great effort, he will keep on shining and rocking the audiences with his melodious singing.

The exciting year 2019 awaits you, Arijit, with the fruits of your labor finally paying off. This is the right time to set your priorities straight whether it concerns your personal or professional life. Arijit Singh will get plenty of opportunities to indulge in activities other than work to make use of them to build on your relationships. This year will we financial blessing year for Arijit.