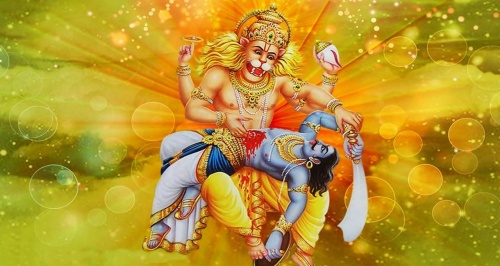 Narasimha Dwadashi is a Hindu festival dedicated to Lord Vishnu and it is celebrated by Hindus all over the world. It is celebrated on Vaisakh Chaturdashi (14th day) of the Shukla Paksha. Narsimha is the fourth incarnation of it Lord Vishnu where he appeared as a man-lion that is the face was like a lion and the trunk was like a man. He had killed demon Hiranyakashipu on this day. All Lord Vishnu devotees also observe fast on this day. This year, Narasimha Jayanti falls on Friday, 17th May 2019.  There are two sorts of Dwadashi specifically Shuklapaksha Dwadashi twelfth day of the splendid portion of the lunar month and Krishna Paksha Dwadashi twelfth day of the dim portion of a lunar month.

I bow down to Lord Narasimha who has a fiery form and is all pervasive. You radiate heat and radiance all around. With a terrific and auspicious form, you are the death of death. Narasimha mantra is said to be a Kavacha mantra that can protect the chanters from all dangers of the world. 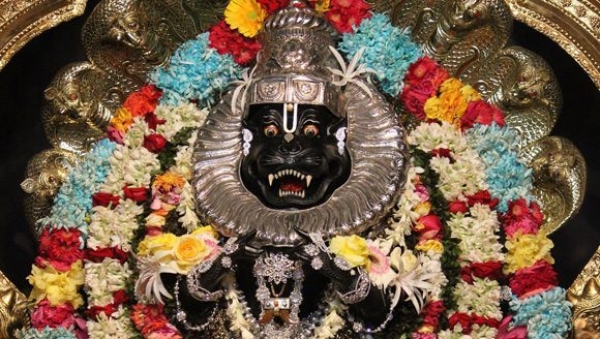 The fasting for Narasimha Dwadashi starts on the Ekadashi day (one day before Dwadashi) with the puja performed in the morning.

Devotees must observe a strict fast on this auspicious day while offering pooja to Lord Vishnu.

The devotee fasts for the whole day without eating and drinking water.

If the devotees are unable to keep a strict fast, then intake of fruits and milk with water are recommended.

On the next day of Dwadashi, the puja is repeated in the morning and the fasting is concluded during Parana.

Devotees puja is performed on this day with idol or picture of Lord Narasimha and Goddess Laxmi.

The devoted soul wakes up early during the Brahma muhurta and takes a bath. He or she should wear new and fresh clothes.

Devotees should perform puja and offer gram dal and jaggery to the deity.

The puja ceremony should be done with friends and relatives offering items like flowers, sweets, kumkum, coconut.

The devoted soul can recite Narasimha mantra with rudraksha mala. The recitation of mantras will bless the devotees with life satisfaction.

Devotees can donate clothes, precious metals and sesame seeds on this day to the poor.

The devoted souls are blessed with courage, confidence protection.

According to Hindu mythology, there was a devil king named Hiranyakashyap, whose brother Hiranyaksha was killed by  Lord Varaha, the third Avatar of Lord Vishnu. Hiranyakashyap wanted to avenge Lord Vishnu over his brother’s death, and he gained a boon from Brahma that would make his death a rare phenomenon. However, Hiranyakashyap’s son Prahlad was a great of Lord Vishnu and thus Hiranyakashyap tried to kill him many times (but failed). Losing his patience, Hiranyakashipu asked Prahlad whether Lord Vishnu exists at all. Prahlad said He is the essence of creation and so Lord Vishnu is verily present in every atom of the universe. When Hiranyakashipu asked whether Vishnu was present in a pillar that he pointed out, Prahlad affirmed and Hiranyakashipu broke that pillar with his mace. Lord Vishnu emanated from the pillar in a highly ferocious Man-Lion (Narasimha) form, tore Hiranyakashipu to pieces and blessed the divine child Prahlad profusely. It is believed that worshiping Lord Narasimha brings good fortune and liberates us from our past sins while protecting us from the forces of evil. This occasion is also known as Govinda Dwadashi

The celebrations of this festival are very elaborate and significant at the Jagganath Temple in Puri. Besides the festivities of Govinda Dwadashi is also popular in Dwarka Tirumala Venkateshwara Swamy Temple, Tirumala Tirupati Balaji Temple and other prominent temples of Lord Vishnu. Govinda Dwadashi is celebrated with great enthusiasm and reverence in the southern states of India as Tamil Nadu, Andhra Pradesh, Kerala Karnataka.


The significance of Narshima Dwadashi

On the spiritual day of Narshima Dwadashi, the devoted souls observe fasts in order to seek blessings from Lord Vishnu. Devoted souls get the blessings and able to lead a fearless life and conquer all obstacles of life. They achieve happiness and inner peace. It is believed that Lord Narshima blesses his devotees with courage, confidence, and protection. Hence, Narasimha Dwadashi is considered highly efficacious. According to Hindu Mythology worshiping Lord Narasimha brings good luck, prosperity and liberates devotees from past sins while protecting the devotees from the evil forces.