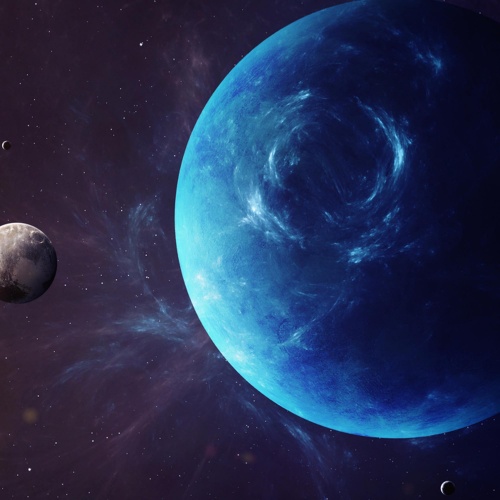 Challenging and prominent Neptune in the chart comparison of two people needs to be handled effectively in a way that the relationship of the couple survives this difficult situation in which it has been put due to this planetary position. If not done the way it has to be done it will drain the “owner” of the personal planet. On the contrary, if the relationship does come to an end the Neptune person needs to let go of it and not lingering onto the emotional breakdown after break up. But they typically may not know how to close this relationship emotionally. People with whom a Neptune person breaks up find it very difficult to move on and it may take them months if not years to get over that. This applies to all personal planets, from Sun to Mars, but on a more challenging level emotionally/romantically when it’s the Moon or Venus involved. The personal planet involved is important, of course, but there are general themes that can apply to all.

The Neptune person may abruptly leave without giving any reason. He/she may have become frustrated with a partner who never seems to be satisfied and vice versa as well. Most of the time, he or she hangs around and it’s hard to get the Neptune person out of your life, mainly because there can be a lack of closure, a lack of clear answers as to why that person “faded out”. To move on in life, it becomes extremely important for the person left by a Neptune person should soon find out the solid reason for his fading away.

They both most likely to idealize their relationship to give an enthusiastic start to their relationship but as time passes by the reality kicks in and then comes the bitter disappointment and emotional pain due to their dreams not being met as per their plans.

It is to be noted that it doesn’t mean that the Neptune person plays “villain” here and the personal planet the “victim”, even if it often appears to be the case. There is something more to it that goes unnoticed or misinterpreted. The personal plant person expects a lot from his Neptune partner who in turn tries to do everything to live up to his expectations and not disappoint him. This can be considered deception as Neptune's partner would not be able to project his real self, it would lead to frustration and the end result would leave the personal planet owner feel let down, deceived, misled, disillusioned, etc.

Neptunians are errors of omission. Denial and procrastination can also be considered deceptive, depending on who is doing the judging. The Neptune person may not be deliberately deceiving as he tries to make his partner happy by trying to meet his expectations. The personal planet person might be choosing, whether it’s a conscious choice or not, to be deceived.

Now when it’s the Venus –Neptune relationship, the Venus person might turn a blind eye to certain traits or activities of the Neptune person. As for an example, a person knows or senses on some level that his/her partner is having an affair, and doesn’t have the guts to confront him/her, and thus chooses to try to fool him or herself. The Venus person might convey the message to his/her partner that he/she wants to know only the good things, not the cold hard facts. After a few such incidents, the partner might decide to avoid saying those things altogether, and thus feeds the illusion making the Venus person more vulnerable to become a Victim.

The emotional ups and downs of the personal planet person are attached to the Neptune person in such a way that one day, she/he might trust Neptune completely, while the next day, he/she might be suspicious of his/her partner leading to an ongoing struggle. The problem may lie in the fact that we set our own expectations of ourselves so high and not only the expectations from the Neptune partner.

People in a relationship with Neptune people become addicted to them. At times the personal planet person may feel he/she is constantly taken advantage of by the Neptune person, yet they can’t help it but seems to be hopelessly addicted to the person. The personal planet owner might be investing a lot of time, energy, and resources into the relationship and the Neptune person seems to be taking these things without returning the favor.

This is generally the case of short-term relationships. But if it’s a long-term relationship, it is not always the Neptune person who could lose interest first. Neptune is intrigued by the enthusiasm and ardor of the personal planet person and can be quite dependent on it. If the personal planet person shows any sign of losing interest in the relationship it is the Neptune person to deliberately distance himself from his partner to win back the interest of his/her again.

With Venus-Neptune it’s on an emotional level and the Venus person might feel that the Neptune person is just not accessible romantically speaking. With Moon-Neptune, it’s on an emotional level, and the main “issue” is a dependency. With Mars-Neptune, it can be a highly sexual interplay. At first, on a basic level, the Neptune person might initially come on strong then gradually begin to lose sexual interest. A more likely scenario with Mars-Neptune is that the Neptune person is attracted to the Mar’s Leading ability and to direct the partnership, but then later he himself resents this very fact.

Relationships that feel addictive because they are troubled and unnecessarily complicated and where one person is making many sacrifices in order to keep filling life in the relationship are usually Neptunian flavor.

There is a solution to every problem and dealing with the Neptunian relationship is no different. To manage Neptune in synastry in a long term relationship involves more conscious behavior of both the parties involved. It's very difficult to find a balance in a relationship with the involvement of Neptune partner but one should do it by seeing things realistically and not projecting our own dreams and ideals, or fears, onto a person, instead of accepting them for who they are. The ultimate goal of any successful relationship is unconditional love, care, respect for differences, support and acknowledging the good and bad and not expecting them to become what we wish them to see.

It’s very normal to have ups and downs in a relationship especially when we learn about each other but if the discoveries are dramatic, then some important signals are being missed. Before getting to a comfortable place of acceptance with Neptune difficult in synastry, think about adjustments to be made in a relationship, not sacrifices as it may be followed by serious guilt trips and resentments which ultimately lead to the destruction of the relationship instead of maintaining it. We also might try cutting out the behavior that makes us feel like powerless victims and discovering whether the relationship with the Neptune can survive. Balance of being practical and emotional at the same time can help you save yourself and your energy.