Home other What is Ophiuchus? When did Ophiuchus become a zodiac?

What is Ophiuchus? When did Ophiuchus become a zodiac? 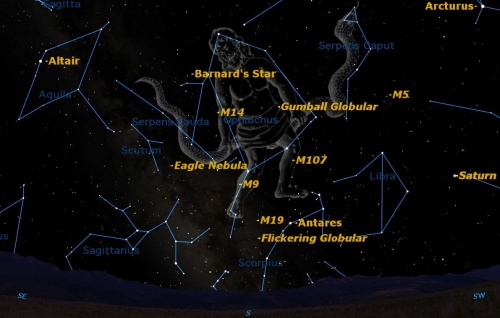 According to astrology, zodiac signs play an important role in individual life. Zodiac signs are very influential future predictions and achievements of life. The Ophiuchus is the thirteenth zodiac sign. Yes don’t be surprised, it is the astrological revelation that Ophiuchus is the new addition to the zodiac sign. Ophiuchus zodiac sign falls between Scorpio and Sagittarius which means the Ophiuchus dates go from November 29 – December 18. Ophiuchus is a large constellation straddling the celestial equator. Its name is from the Greek "Ὀφιοῦχος " Ophioukhos; "serpent-bearer", and it is commonly represented as a man grasping a snake. The serpent is represented by the constellation Serpens. Ophiuchus is a fairly large and rambling constellation, but it is one of the least well-known. Although Ophiuchus does touch the elliptic — the path that the sun appears to take through the sky — astrologers for centuries ignored it as part of the Zodiac. The constellation finally got some respect in 2011 when they added Ophiuchus as an astrological sign and realigned the Zodiac calendar.

In the year 2016 NASA has a surprising astrological revelation related to Zodiac signs. The revelation resulted in the addition of the 13th Zodiac sign. Earlier there were only 12 Zodiac signs only. Individuals born between November 29 – December 18 are officially an Ophiuchus (determined by when the sun passes in front of the constellation). According to Eastern Astrology, Ophiuchus falls between the signs of Scorpio and Sagittarius, marked by the dates Nov. 17 through Dec. 29.

Ophiuchus [Oaf-ih-YOU-kus] spans 948 square degrees in the area. It can be found northwest of the center of the Milky Way. It is situated near the constellations Aquila, Serpens, and Hercules and opposite Orion. The southern part lies between Scorpius to the west and Sagittarius to the east. The position of Ophiuchus is:
• Right Ascension: 17.18 hours
• Declination: -4.24 degrees
• Visible: between 80 degrees and -80 degrees
• Best viewed: In July around 9 p.m.

Ophiuchus sign
Just as other zodiac signs are represented by a symbol. The Ophiuchus too has a symbol representation. Ophiuchus is known as the serpent bearer and is symbolized by a man holding onto a snake. The 13th zodiac sign is depicted as holding Serpens Caput in his left hand and Serpens Cauda in his right hand.

Zodiac elements are divided into four categories. Each element belongs to a particular zodiac sign and shares its own characteristics. Fire, Earth, Air, and Water. At present, the Ophiuchus sign is not related to any Zodiac element. According to personality traits, the astrological assumption believed that the explosive Ophiuchus may be related to the fire of the zodiac element.

Ophiuchus does not appear as a zodiacal constellation in the horoscope, the reason behind this lies 2,500 years ago, when the horoscope originated in ancient Babylon, the Sun crossed through each of the zodiacal constellations on different dates than today, approximately four weeks earlier. The Ophiuchus constellation is known as "the snake bearer" as its boxy shape divides the constellation Serpens (the snake). It is often depicted as a muscular man draped in robes wrestling a large serpent. The ancient Babylonians invented 12 zodiac signs which are related to the twelve months of the year. Originally, there were 13 constellations in the Babylonian zodiac, with the Ophiuchus constellation also in the sun's path. This didn't fit neatly in the 12-month calendar, so for whatever reason, Ophiuchus was left out. So Ophiuchus is not a new one, it was observed by Babylonians when they had first observed the stars. The Ophiuchus does not have opposite zodiac signs like other 12 Zodiac signs have. It means they are least compatible. Ophiuchus cannot experience polarity.

Like other Zodiac signs the 13th Zodiac signs, Ophiuchus too have specific traits. The famous Ophiuchus people include Taylor Swift, Jay-Z, and Britney Spears. The lucky number for Ophiuchus is 12. The core trait of Ophiuchus are, they are very passionate and intelligent people. They are information seekers and are known for their attractive physical appearance too. They are gifted with wonderful qualities of interpreting dreams, visionaries and are wisdom seekers. According to astrology they naturally attract good luck. They are honest and clever people. The negative traits are also present on Ophiuchus like the other Zodiac signs. Ophiuchus is not great at monogamous relationships, as they want a lot of freedom for themselves, so Ophiuchus who are in intimate relationships are often jealous. When it comes to daily routines Ophiuchus are irresponsible and restless too. They have a dry sense of humor and their sarcastic comments may hurt someone. They are secretive, arrogant and some have the very wild temper. In general House Ophiuchus represented Unity. Its people were spirited, magnetic, impulsive, clever, flamboyant, and at times jealous, power-hungry, and temperamental.

So some individuals might be confused, some are distressed with the astrological revelation of the 13th Zodiac sign. But you should not worry. Believe in yourself . the bombshell astrological revelations have both positive and negative effects but the fortune is always a path which will lead to you to the path of success.