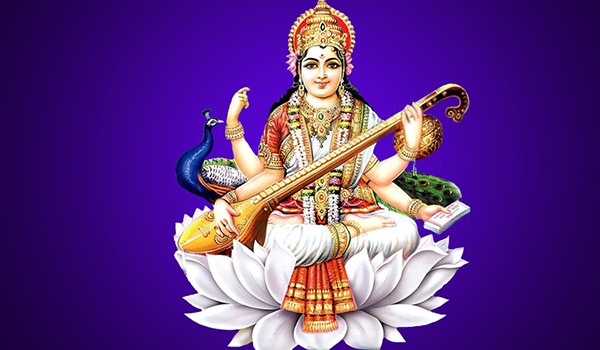 Goddess Saraswati, the Hindu goddess of knowledge and wisdom is worshipped by a large number of devotees in India. There are two main festivals in a year when Saraswati Puja takes place, once on Vasant Panchmi that falls during Magh Panchami in Hindu Calendar (January/ February) and secondly on  Sharad Navratri that falls during the Ashwin month in the Hindu Calendar (September/ October). Goddess Saraswati is also worshipped during Diwali Puja in Gujarat and it is known as Sharda Puja.

Saraswati Puja during Sharad Navratri is an important festival, especially in South Indian states of Tamil Nadu and Kerala. Here it is performed on the last day of the Navratri celebrations and is practiced on the same day as ‘Ayudh Puja’. Dussehra is also included in the festivities of Saraswati Puja. The custom varies from state to state. It is celebrated on the 9th day of Navratri in Tamil Nadu and Kerala while on the 10 i.e. on Dussehra in Karnataka and Andhra Pradesh. In the northern and western parts of India, Goddess Saraswati is worshipped for 4 days during the Navratri celebrations.

On the occasion of South Saraswati Puja that falls during the month of September or October disciples worship Devi Saraswati and on the next day of Saraswati Puja students aged between 4 to 5 years begin their studies. This is called the ‘Vidyarambham’ ceremony. The festival is celebrated by all in the hope of acquiring wisdom and knowledge by seeking blessings from Saraswati Maa.

Wisdom and Knowledge is the key of a balanced life and Goddess Saraswati is believed to be the bearer of all the knowledge and wisdom of the Universe and it is believed she blesses her devotee’s with wisdom, knowledge, arts education. According to the Hindu mythology, Goddess Saraswati is one of the trinity Goddess and the last day of Navratri is celebrated as ‘Maha Saraswati’. The ninth day is also known as ‘Maha Navami’. As per the religious stories, it was on this day that Goddess Saraswati shaped powerful weapons to kill the devil named ‘Magishasuran’. Ever since then the weapons are worshipped and this day is celebrated with great joy. This worship of weapons is also called as ‘Ayudha Puja’. On this chosen day, people worship their tools and weapons of daily use. During the Navratri celebrations in South India, the first 8 days are devoted to different forms of Goddess Shakti and last day is dedicated completely to Goddess Saraswati.

Some four Interesting Facts you didn’t know about Makar Sankranti